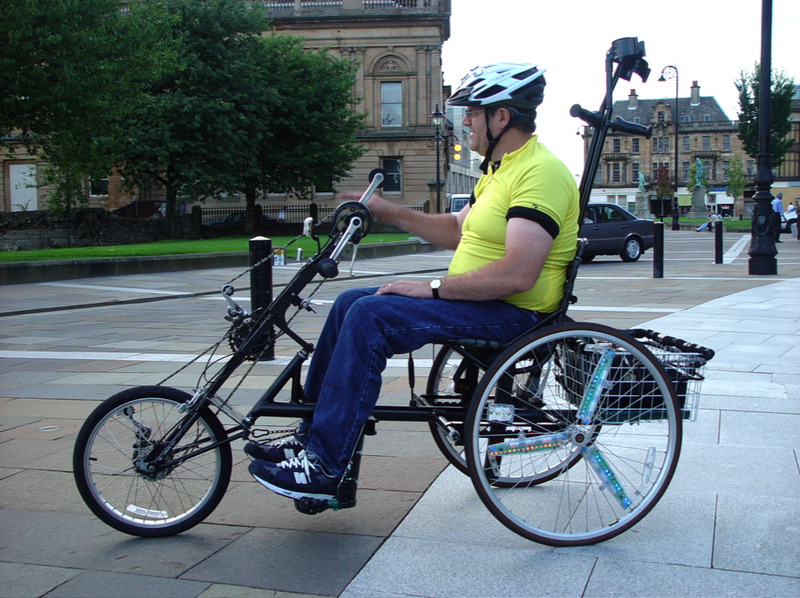 The New England Handcycle (1980 to 1990)
A little history: I started New England Handcycles (NEH) in 1980, just after I graduated from MIT. I ran NEH as a side business (my main occupation was in high tech at companies like Computervison and Apollo Computer. I later started Avid Technology, Inc. in 1987, and Wildfir Communications in 1992) Rory McCarthy was my third customer at NEH, and he started doing wild things like 24 hour bike marathons, riding across the country, and then in 1995, he rode around the world (13,500 miles in an epic trip organized by World T.E.A.M Sports) using a Freedom Ryder handcycle (not shown here).
The photo above was taken in 2004 when Rory and I took a trip to Scotland using our NEH handcycles. They aren't fast, but they are comfortable, practical, and they turn on a dime. You can ride inside and outside. To this day, I mainly use the 1982 NEH handcycle shown here.
This post is about comparing the geometry of these vehicles. Right now, we're in process of exhaustively documenting the geometries that work on our other handcycles. These drawings are from back in 2006 during the design of Morph II, and while they are not dimensioned, they do show relative layouts.
The Travel Bike (2003) 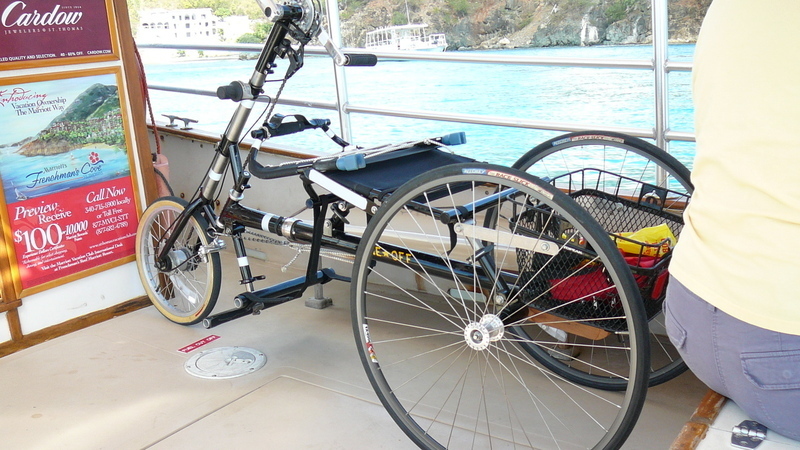 This is the "Travel Bike." I commissioned this bike and co-designed it with Mike Augspurger of One Off Titanium.  It is shown here with the seat folded down. The bike weighs in at a wonderful 34 pounds, and yes it does have some titanium. (The large vertical for the front pedals is titanium; so are many of the telescoping parts. The rest is chrome molly steel.) The silver coupler (follow the main tube to the left of the "off" decal and you'll see it) lets the bike break in two in a few seconds. It then fits easily in a car trunk. Below its in the back of a small minivan.
I've taken the travel bike all over the world and had great results with it. The benefits of the middle coupler cannot be overstated. That, with quick release wheels and a fold-down seat make the vehicle amazingly portable.
We hope to come close to this portability with the Morph by also offering some kind of mid-bike coupling.
Here is the side view layout of the Travel bike. Not sure that the head tube is shown at the correct angle 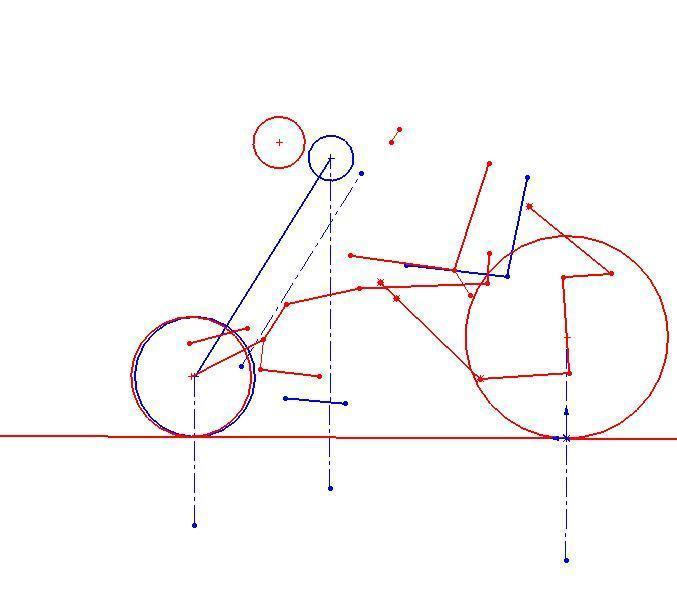 And here is the comparison with the NEH bike. Notice how much further forward the rider sits in the Travel Bike. The result is dramatic. The Travel Bike (red) is like a mountain goat when it comes to climbing steep hills. You can go straight up, and the wheel doesn't slip. The NEH bike has the rider sitting much further back, which puts less weight on the front wheel.

The Bobby Hall Handcycle
Rory and I both own Bobby Hall handcycles, and we love them. They are fast, comfortable, and stable. The Bobby Hall bike is our "gold standard" for the Morph for low rider seat position, seat height, seat layout and  pedal placement. That's me with running my dog Jake using the Bobby Hall in the photos-ops above. But the truth is, I mainly use the NEH handcycle. The Bobby Halls are fast, but they are very hard to maneuver and hard to get into because they are so low. For example, the Hall handcycle has difficulty making a U-turn in a normal suburban street. The NEH handcycle can turn in its own 75" length. The low 13" seat height of the Bobby Hall is great for speed, but very hard to get in and out of from a wheelchair.
The Morph will address all of this. You get in and out an any height that's comfortable. You morph down for speed, and then up (and even way up) when you need maneuverability, or want to go inside, or talk to people you meet. 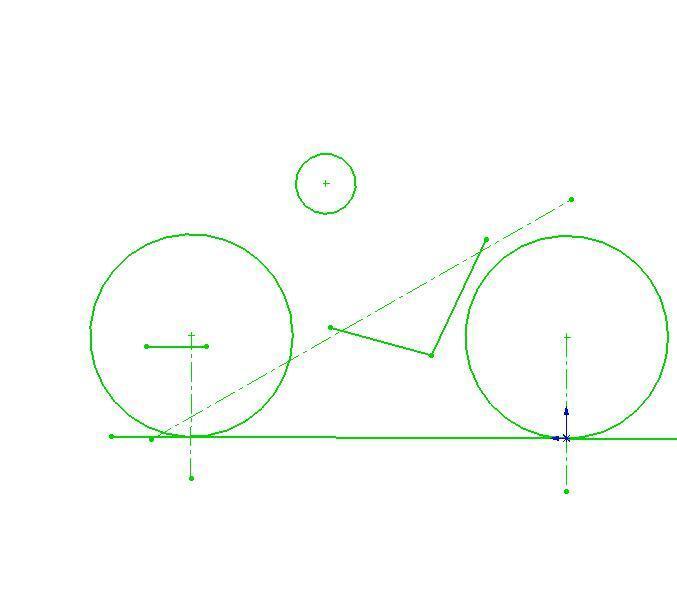 Here is the side view of the Bobby Hall. Note how low the seat is, and how much it tilts back. The dashed line shows the extension of the head tube, and you can see that there is about 4" of trail. 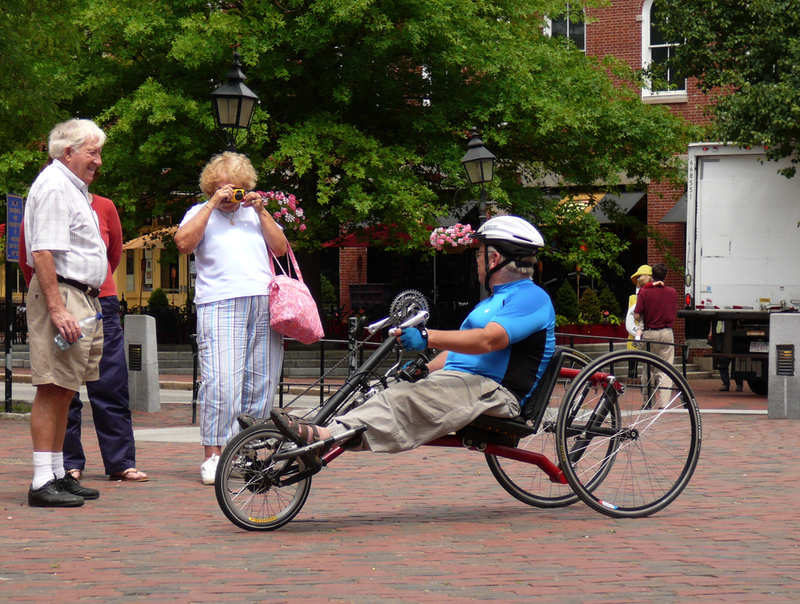 Here's Rory on the Morph II in Newburyport, MA in June, 2007, posing for a photo. 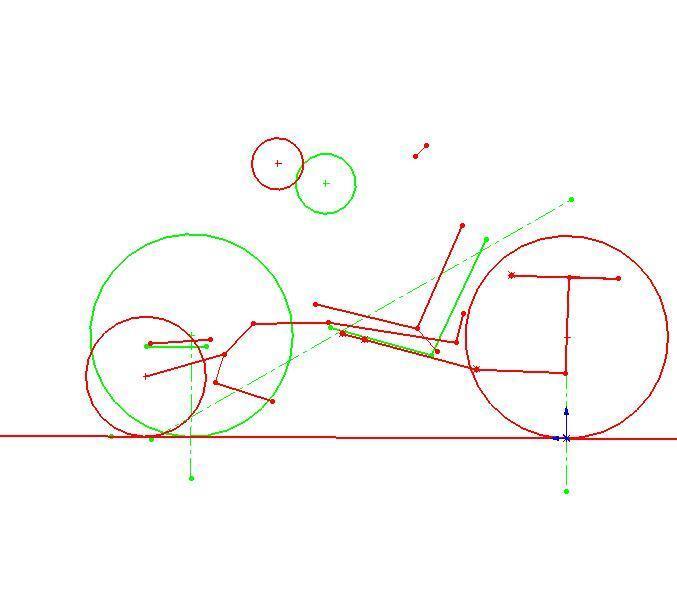 Here we see a side view comparison of the Bobby Hall with the Morph II in low rider mode. I believe this drawing shows the Morph so it matches the Bobby Hall seat tilt, which means it hasn't morphed all the way down (because the extended front struts ahead of the seat -- hidden by Rory's legs). It turns out that the extra height is a problem and make the bike a bit unstable in low-rider mode during high speed turns. 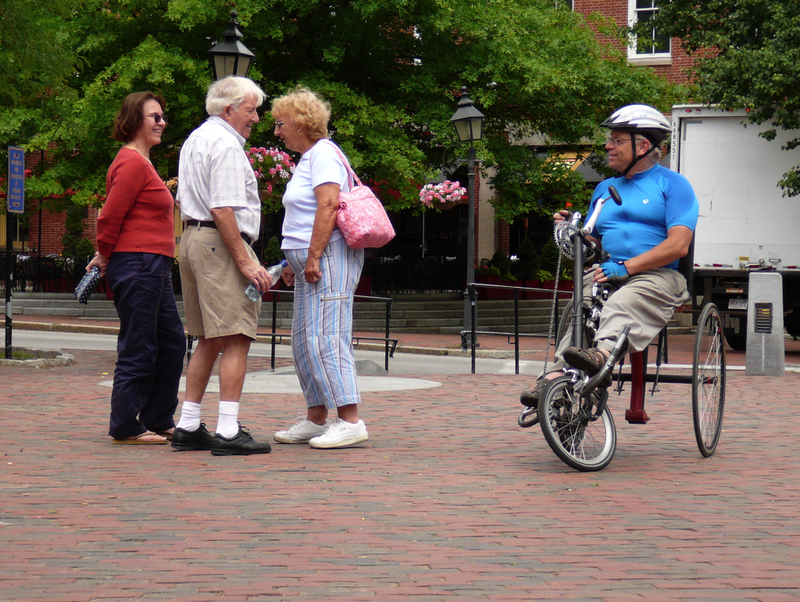 The Morph in high rider mode gets lots of attention. It's really great fun. 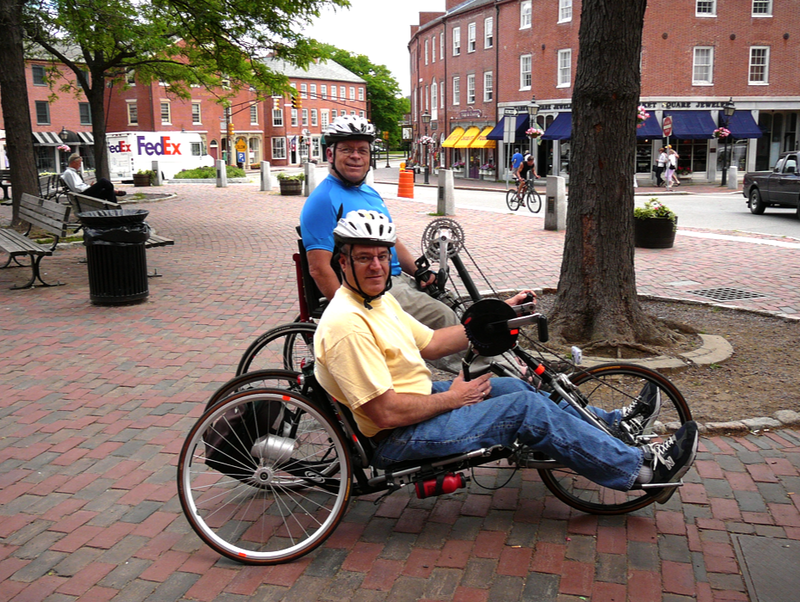 This shows rather dramatically how much higher Rory is in high rider mode on the Morph. 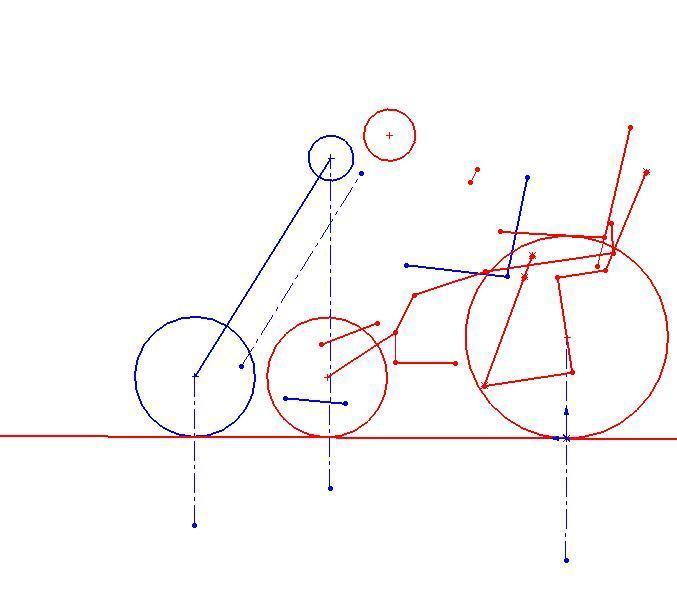 We don't have a Bobby Hall vs High Rider side view. This one is the NEH Handcycle (Blue) vs the Morph in High rider mode. 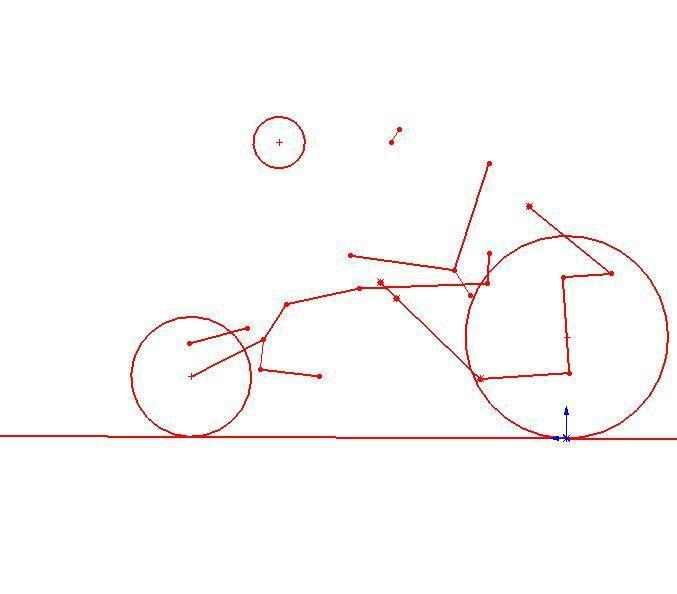 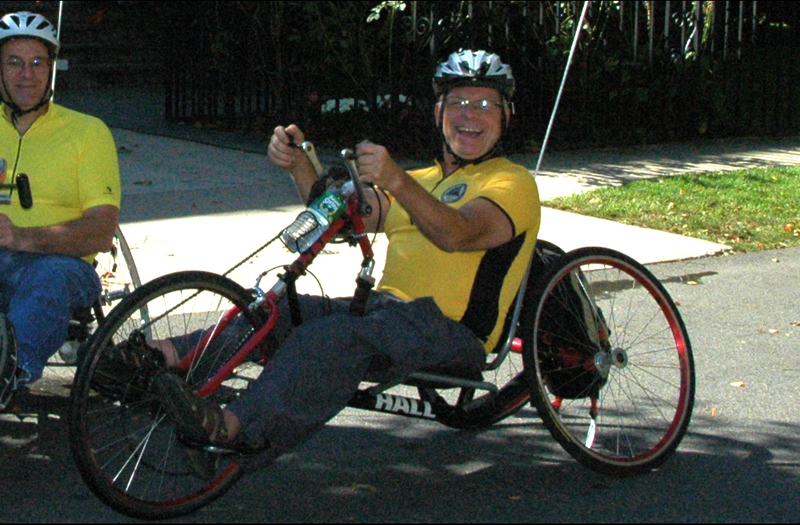