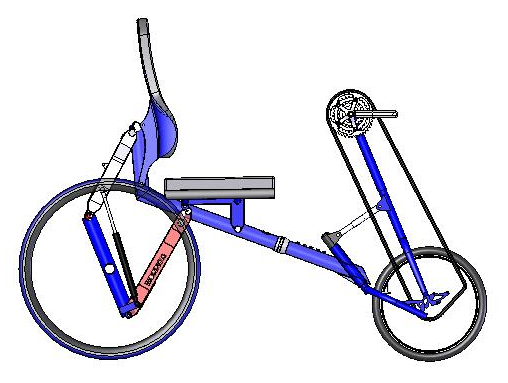 Rory, Graham, Alan and Bill met on Tueday, Feb 2 by screen share. This post will review the decisions made.
Decision 1: Pursue dual gas springs, mounted inside of the two upper morphing arms
There were three choices for the gas shock (we also call it a gas spring.) Choice 1 was a single shock that didn't protrude, but that requires a custom shock. Choice 2 is dual shocks (the choice we picked) and choice 3 was a single off-the shelf shock that would be longer and would have an extension that would hold it down 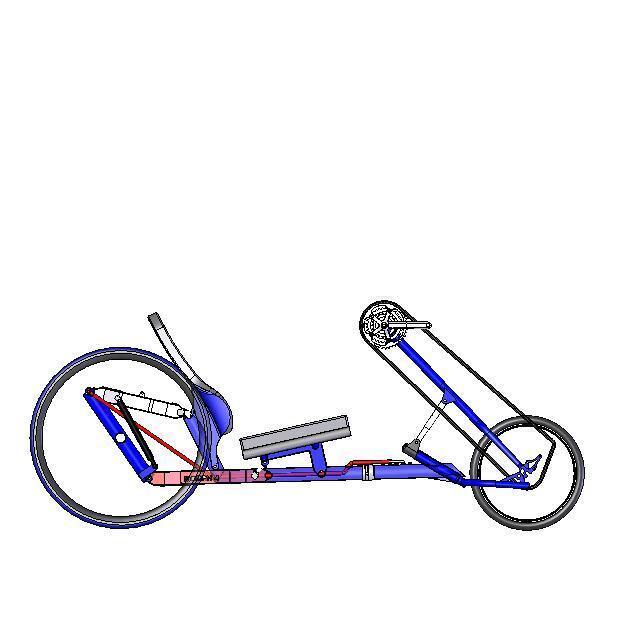 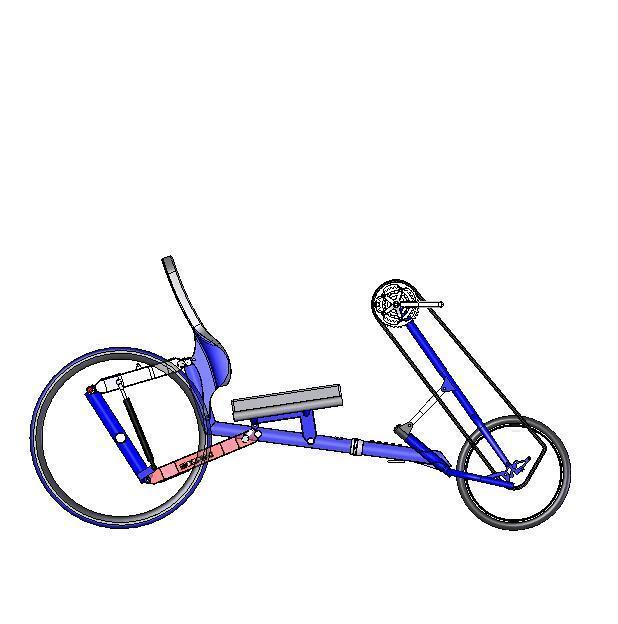 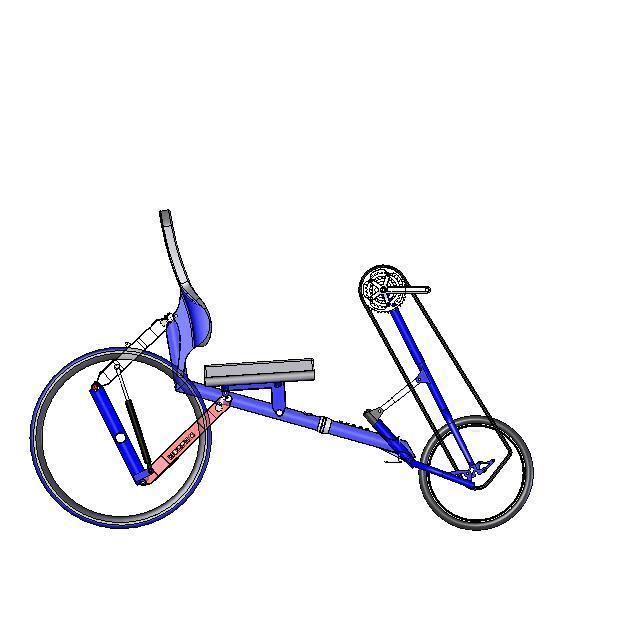 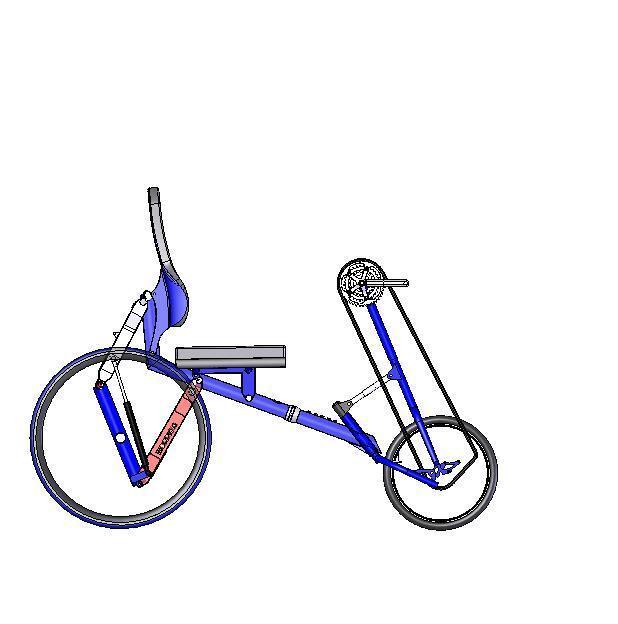 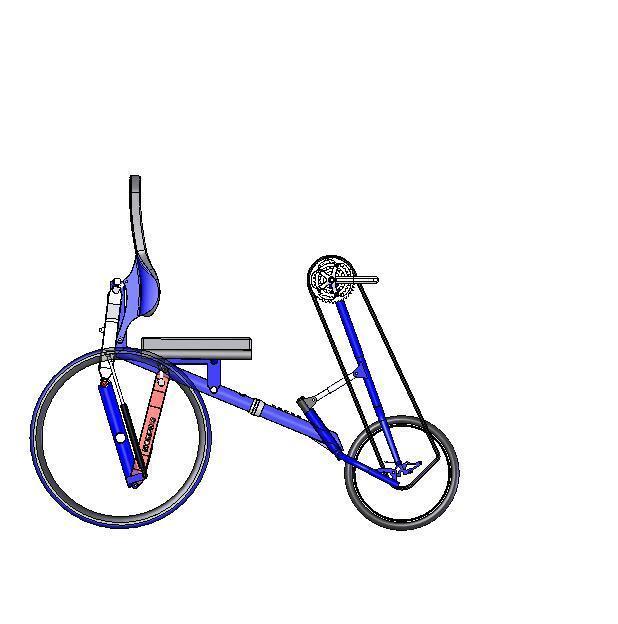 This sequence will let you create your own animation of the morph up/down sequence showing the action of the gas shock.
Download Strut_Closeup_Movie_-_iPhone.m4v
This animation shows Choice 3 - a single, longer shock, mounted further along the morphing arm. The good news here is that the total force from the shock can be lower, because the mechanical advantage for lifting is higher. But we didn't like the look of the shock protruding out of the mechanism. Also, Morph 2 uses two shocks, and it has that "magic." We don't know what a single shock would be like. 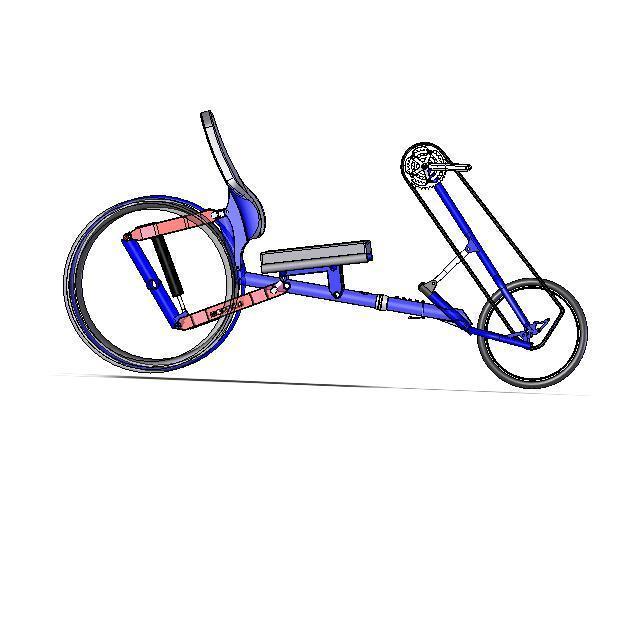 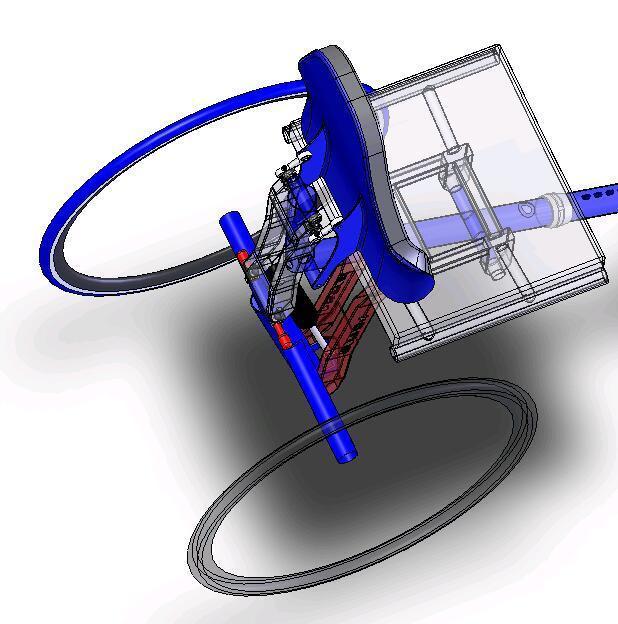 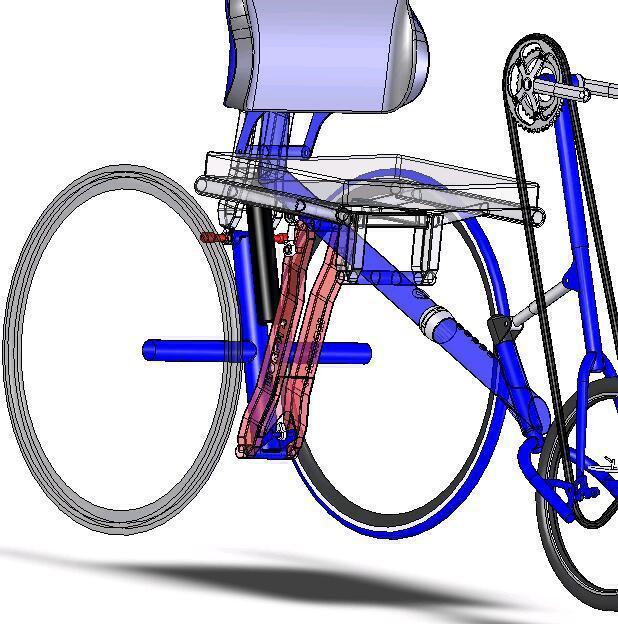 Here we have the custom shock solution. One big, powerful shock mounted at a partial distance along the morphing link arm. But here's the shocker: due to the longer range of Morph 4 compared to Morph 2, this shock needs about 1000 lbs of force for a 250 lb rider. Wow! We don't want a single shock with this much force, and we don't want a custom solution. 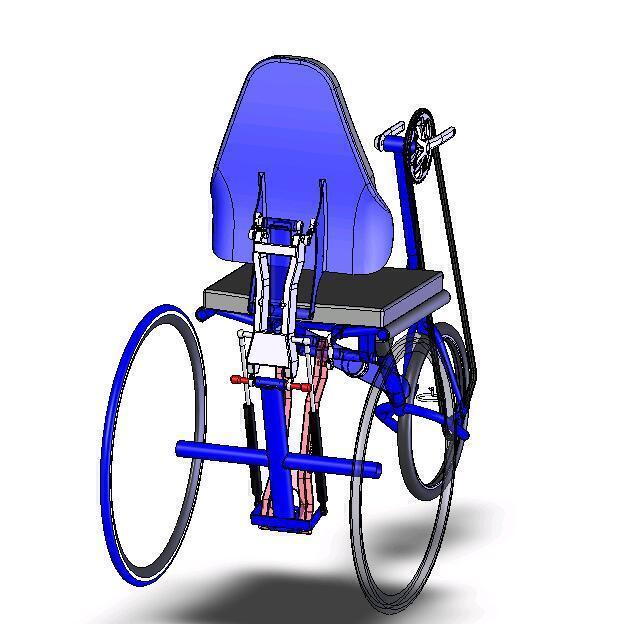 Rear view of the dual shock approach. We're going to see if the two shocks can be mounted inboard of the struts, rather than with the small extension. With 500 lbs on each shock, that' creates a lot of moment a the mounting points. 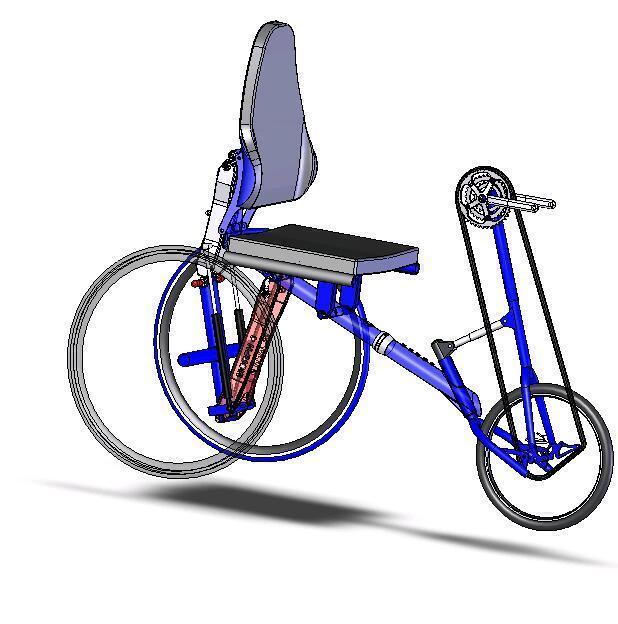 Side 3D view of the dual shocks. 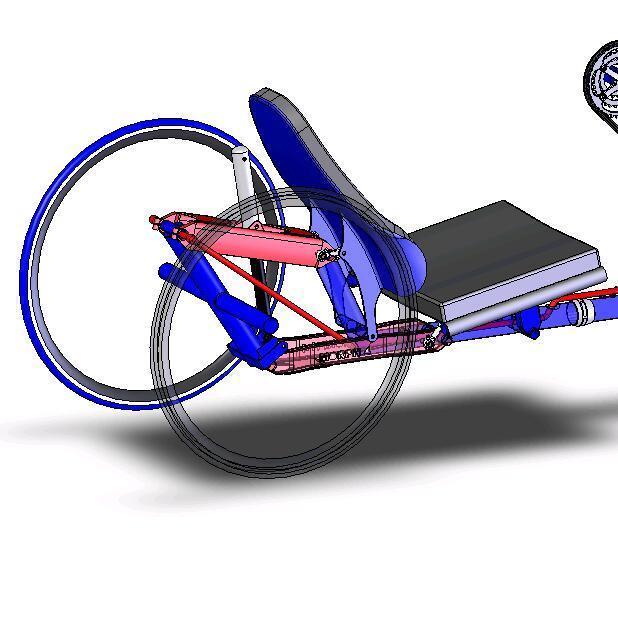 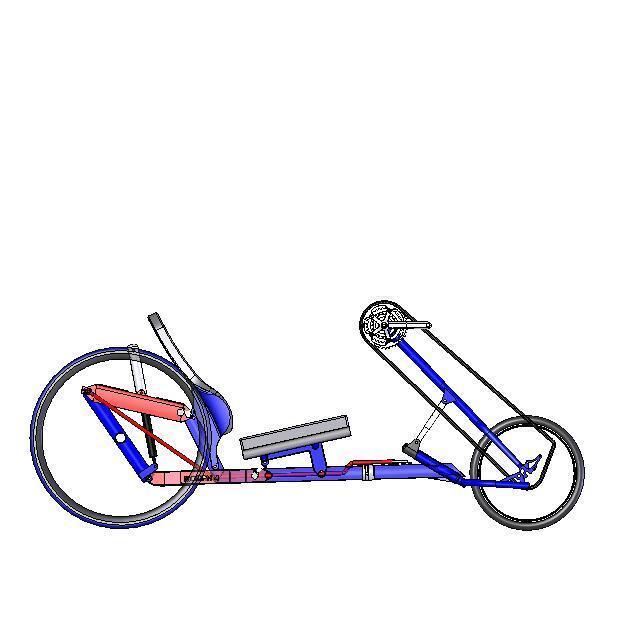 Adjustable Lift System - This side view shows the idea of some of the lifting force being supplied by an elastomer (shock cord). The cord is shown in red. In the low mode, the cord is stretched, and it is providing significant lifting force. By changing the where the cord is attached to the forward frame, we can instantly adjust the up force. This adjustment will be done when in high mode, where the cord is slack. 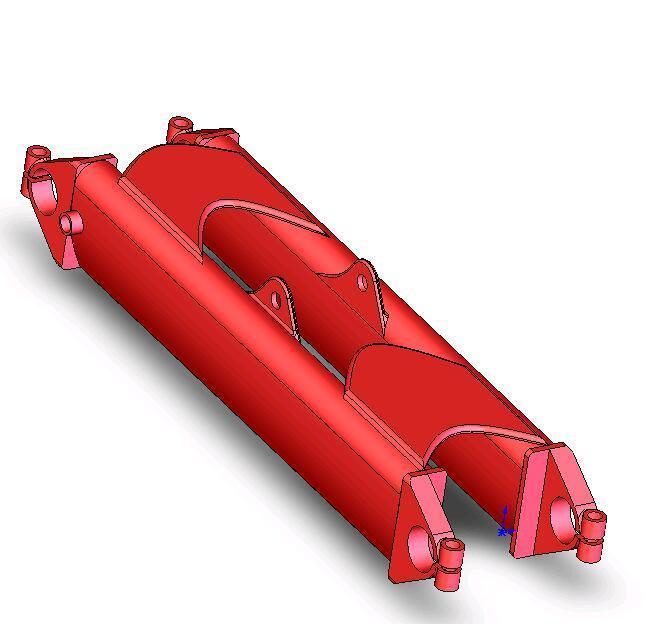 An idea for the upper morphing arm. Teardrop shaped tubing with a machined end that is welded on. Not sure this is an ideal design. 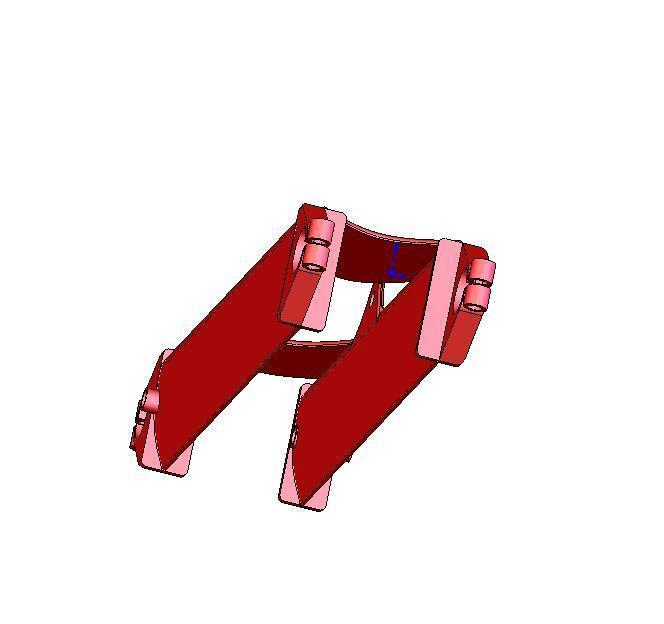 Bearings are captured in the clamp? 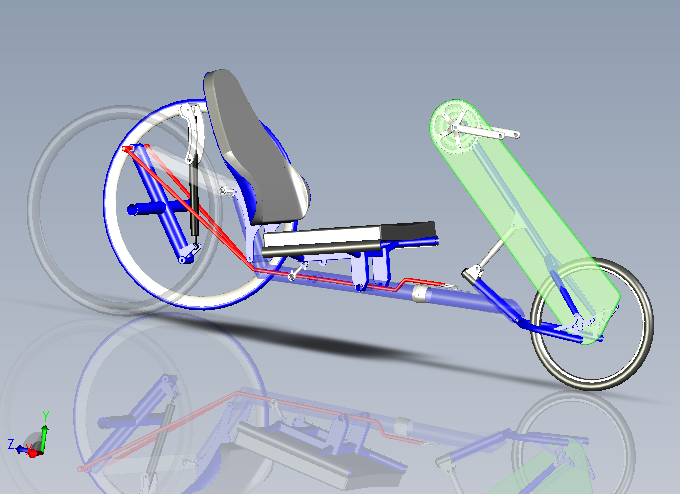 I talked to Bill earlier in the week about the possibility of using elastomers to create a variable force adjuster for the gas shock. I have been thinking about this idea, but I have been having trouble figuring out the geometry. The reason: For it to work well you need 2 converging points on the frame where the maximum lift happens in the low rider position. There are lots of points where you get some lift in low rider position, and then progressively more lift as you morph up. Lets discuss these tomorrow. I also did a bit of research into gas shocks. It turns out that the compressed Argon that I use for welding has almost the a similar individual gas constant as nitrogen (29kg/kg mole for Argon as opposed to 28 for Nitrogen) Both N and Ar are readily available and relatively cheap (nitrogen is used for laser cutting). It comes in a cylinder compressed to 2000psi. If you were to fill this shock with either gas at 2000psi , it would generate ~1700 lbs of force. This begs the question. Why not create a method to fill and bleed the piston. This solves our variable weight problem especially if it can be done on the fly. You could even have a small canister of gas on the bike permanently linked up to adjust the pressure in the piston. Inert gas is relatively cheap....
Download 2009-07-17_Morphing_Handcycle_.mp4

This post shows the uncut video from our design session at Baron Engineering on Monday, August 17, with John Baron and Alan Ball. Bill Warner mans the camera.

This video tips the scales at a Titanic length of 8 minutes, which in the "dog minutes" of the Internet translates to a major time committment (is that 56 "Internet" minutes?)

But there's a lot of interesting stuff here, including how you can make a morphing handcycle using bungee cords. (no kidding. Shock cord works great) 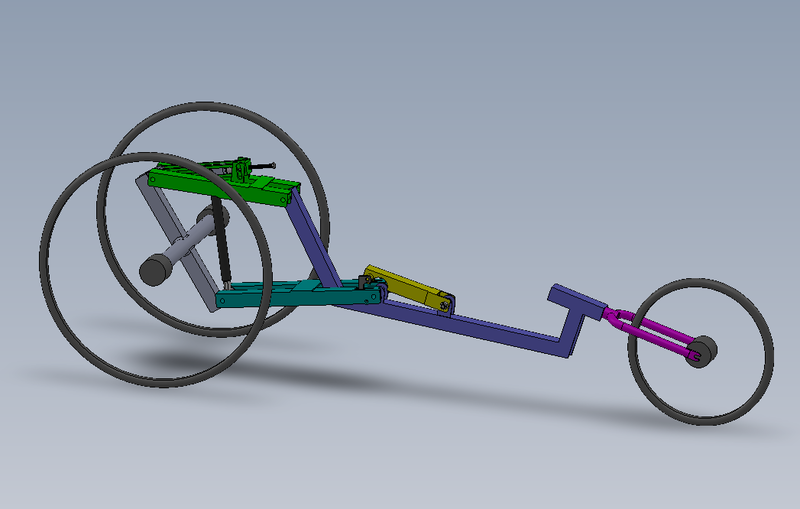 John Baron sent along this e-Drawings file of the test rig showing an adjustable mechanism to compensate for a variety of rider weights. On Morph II, we calibrated the shocks to work for Rory's weight. This worked very well, but doesn't work well for showing other riders. And its not practical for production.
So, one of the goals of the new morph is that it handle a range of rider weights with a simple adjustment. That's what John is testing here.
While Morph II had the frame as a single member, and had two gas shocks, the new design puts two frame members on the outside and a single shock in the middle.
Here's a bunch more photos. 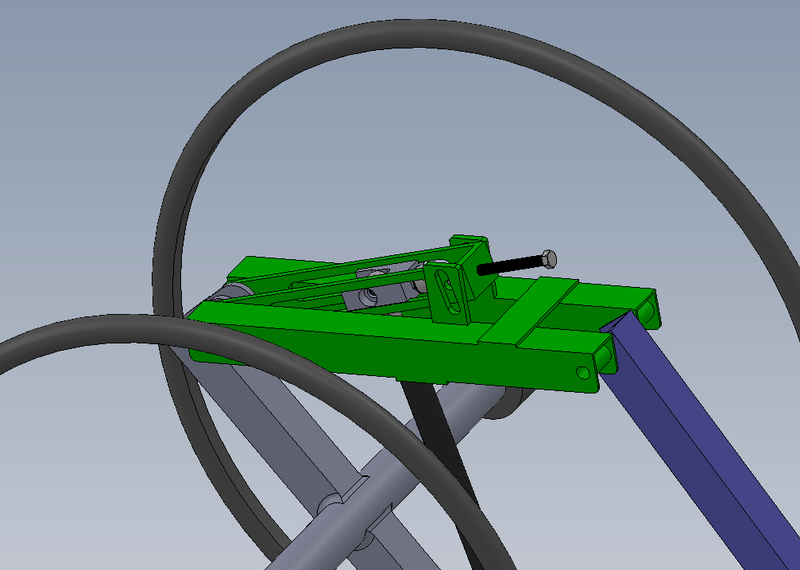 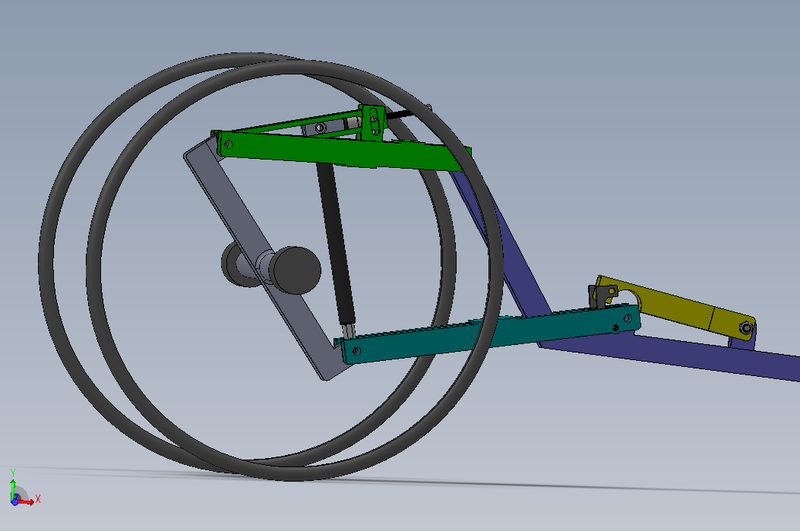 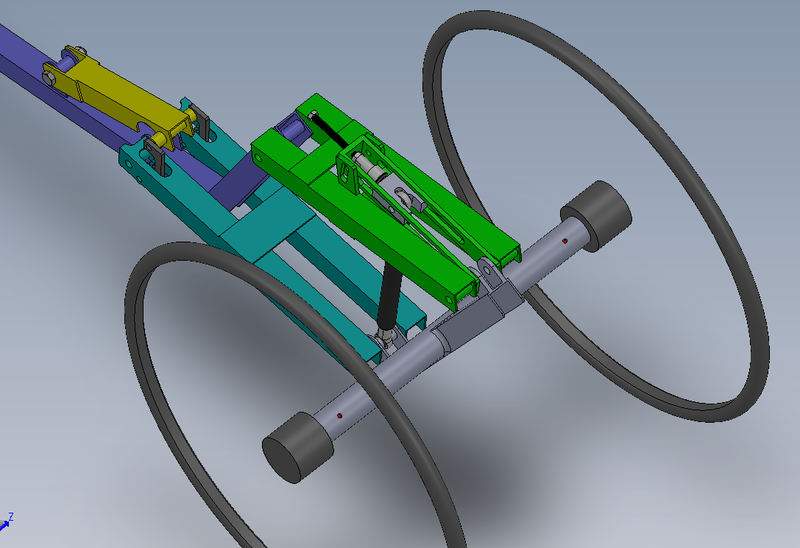 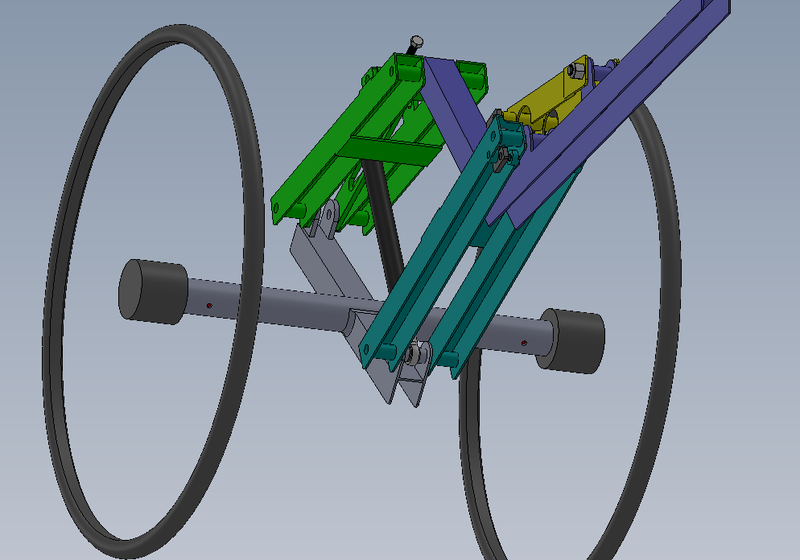 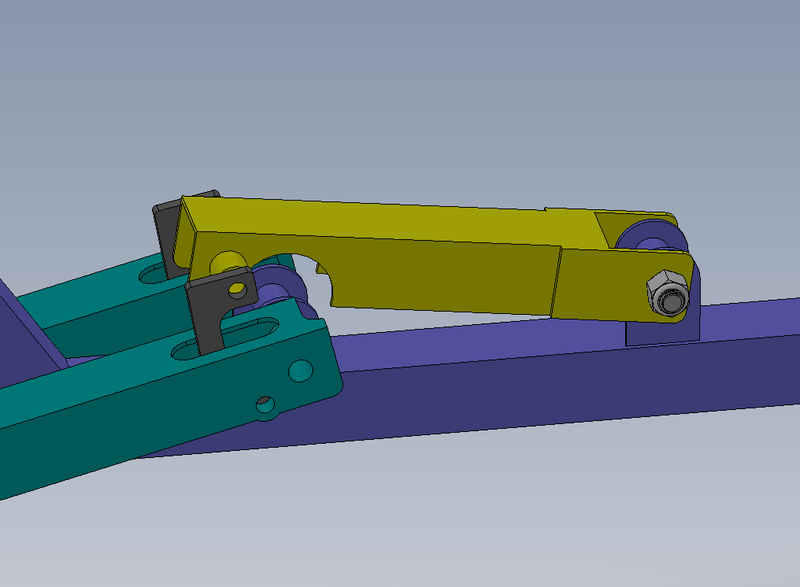 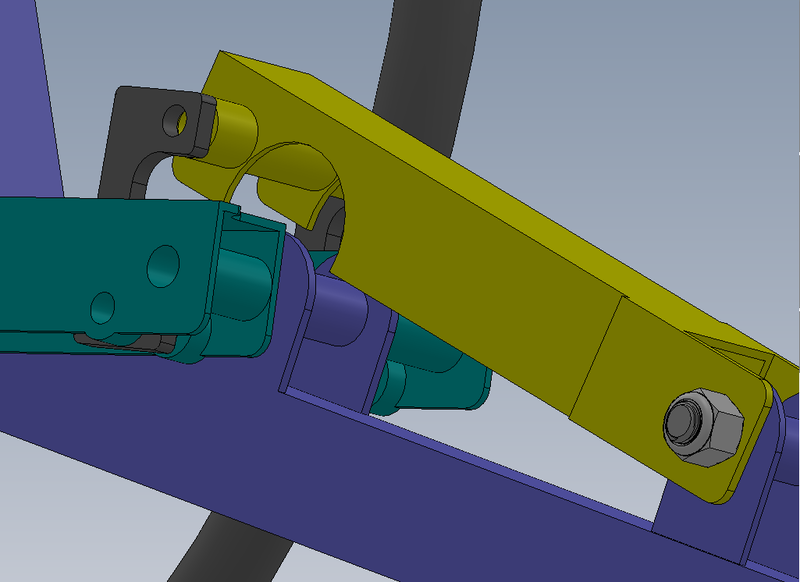 By the way, the gold-colored mechanism is the automatic seat adjuster. As you morph up, it tilts the seat back by droppiing the rear of the seat. This corrects for the forward tilt that morphing up causes.
Here is the e-Drawings file for the SolidWorks model:  You'll need the free e-Drawings Viewer (for Mac or PC)
Download KTR_TLA.easm
Browse the Archive »