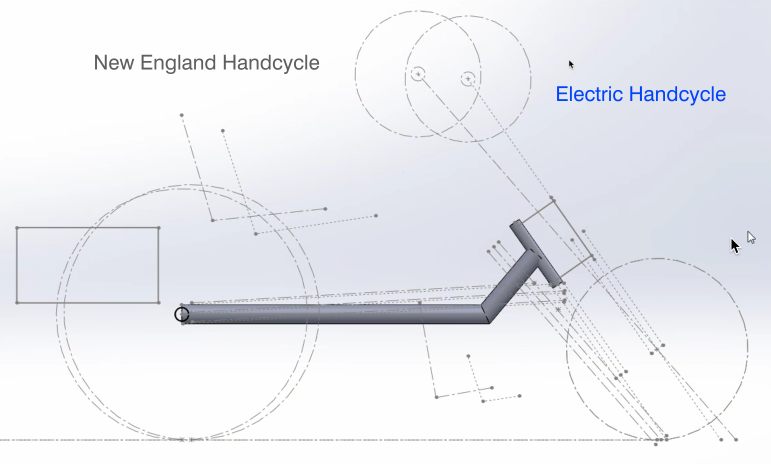 Cody and I did an online design session to review the geometry of three handcycles. The New England Handcycle (NEH), which uses a 20” wheel and a 24.5” track, and has the rider sitting further back and higher up. Then the Travel Bike which is 2” narrower, has a steeper head tube angle by 6 degrees, and the rider sits further forward and a bit lower.
The screen image above shows the Electric Handcycle’s initial choice of geometry, with the same 20” wheel as the NEH. The Electric Handcycle (EHC) pushes the head tube angle to 55 degrees. This moves the pedals forward quite a bit. It moves the rider forward also. The EHC seat is a bit lower for better stability, even though it uses the 24.5” track of the NEH bike, and might be stable enough with a littler higher (and more fun and more visible) seat. 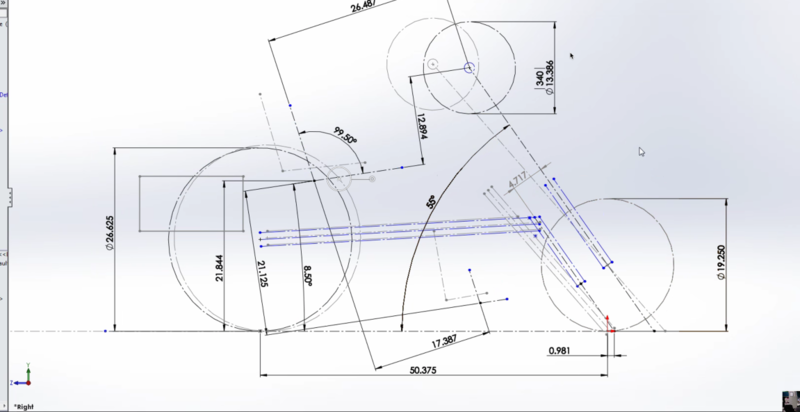 Here is the same illustration, but with a range of useful dimensions, including trail (0.981 for both) and wheelbase at 50.375 for the EHC. Note that the EHC is a bit longer overall than the New England Handcycle. This isn’t a great thing, because overall length matters a lot for small elevators when you get inside. Inches count. Later, we’ll reduce the overall length. 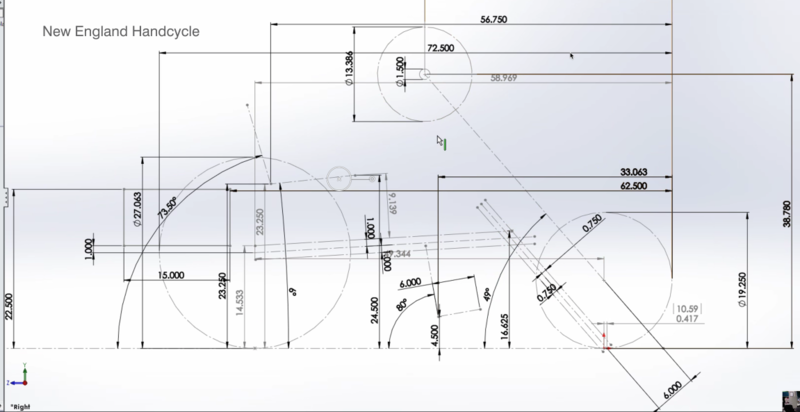 Here is a dimensioned illustration for the NEH bike taken from Solidworks. Note the 49 degree head tube angle, the 49.344 wheelbase (a bit shorter than the initial EHC bike) 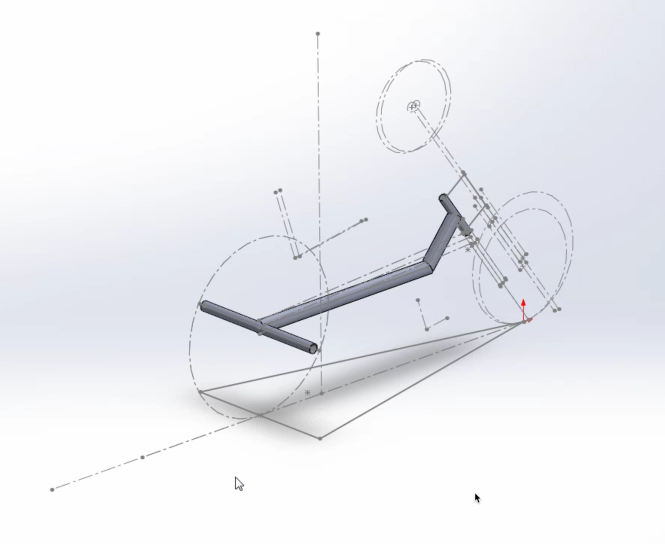 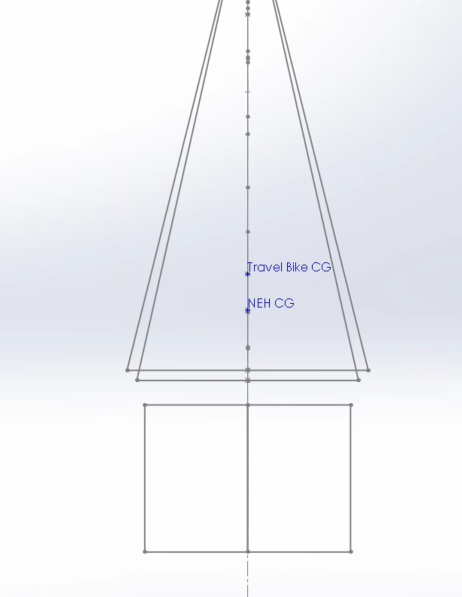 Here you can see the (estimated) CG points in the respective triangles for the Travel bike (narrower with a little longer wheelbase) and the NEH (wider, with a bit shorter wheelbase)
The NEH bike is much more stable and forgiving when riding. But the extra two inches of narrowness on the Travel Bike is a great win indoors. The Electric Bike will spend more time outside, going fast, so we’ll probably go with a wider track. The steeper head tube angle of the Travel Bike puts so much more weight on the front wheel. The Travel Bike can climb steep roads straight up without drive wheel slippage. The NEH bike wheel slips often. So we’ll probably stay with the 55 degree head tube angle. 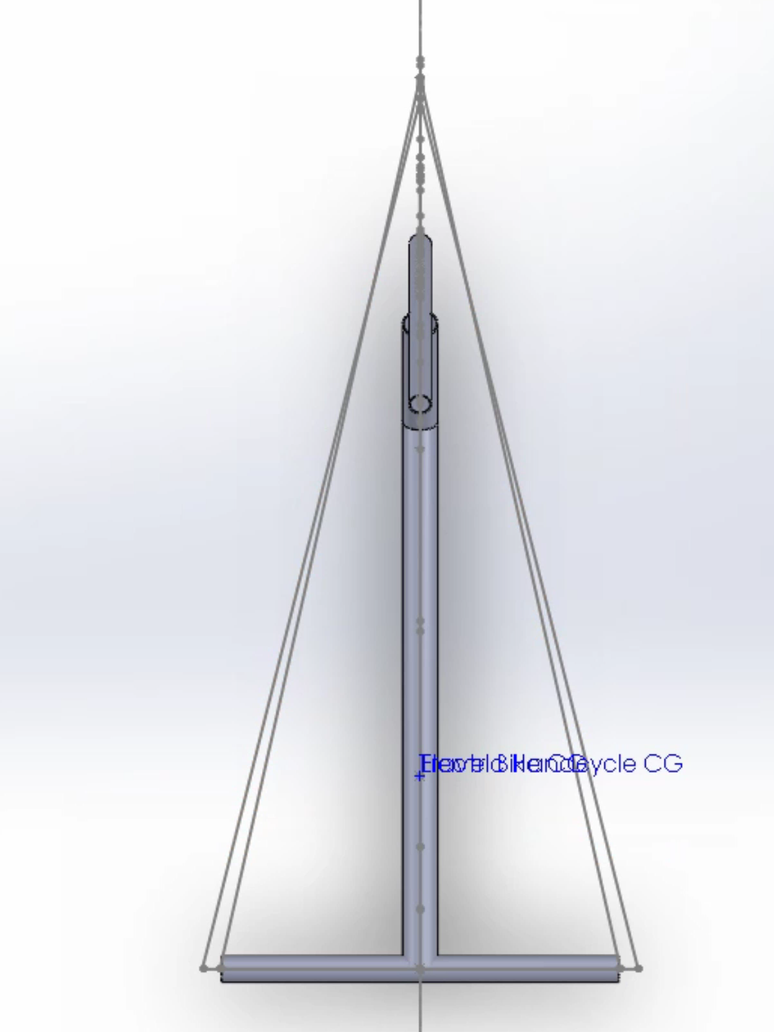 We did some editing of the design and made the Electric Handcycle match the Travel Bike length. So now you can see the EHC and the Travel Bike. The CG points are coincident. But the EHC bike is 2 inches wider than the Travel Bike 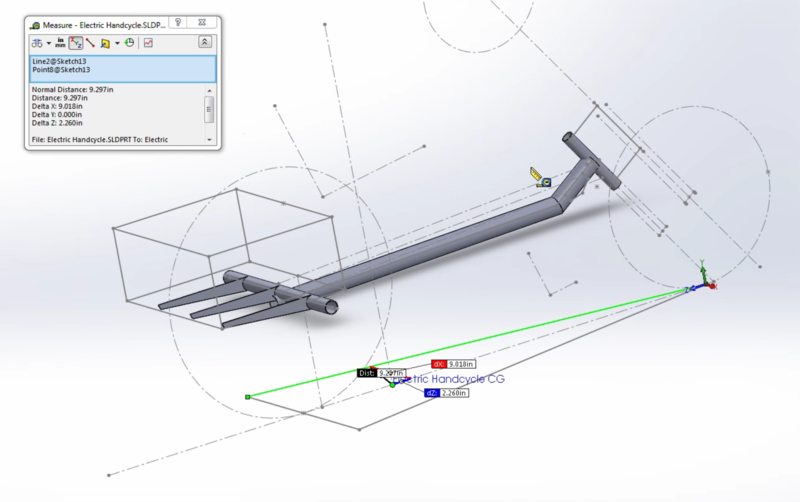 We then played around with the frame design of the Electric Handcycle. The bent (mitered) frame is mounted below the cross axle and gives us a few inches of extra clearance to bring one’s legs over when getting in. That can make a big difference.
Tools for following and learning from the design process
One of the goals of Move With Freedom is to spread knowledge of design of handcycles and other special vehicles. Towards that end, we will be publishing quite a bit of design detail as we figure out the Electric Handcycle. Please feel free to download tools and to give feedback along with way.  Bill is at bill@warnerresearch.com  Cody is at wojcik.cody@gmail.com
Session Screen Recording with Audio and Webcam

I recorded the interactive design session with Cody. He was on Skype from New Hampshire. I was at my office at www.greentownlabs.org in Somerville, MA. A few other people joined in at times. One is my friend Jim Gregoric, and the other is Blake Sessions (www.riserobotics.com
You will notice one edit. That's when we went off on too much of a tangent for even an unedited video. So we spared you that one, but you'll be subjected all the rest! Seriously though, I do hope its useful to be a fly on the wall during some pretty interesting and nitty gritty design work.

By using the E-viewer file below, you can see but not edit the files.