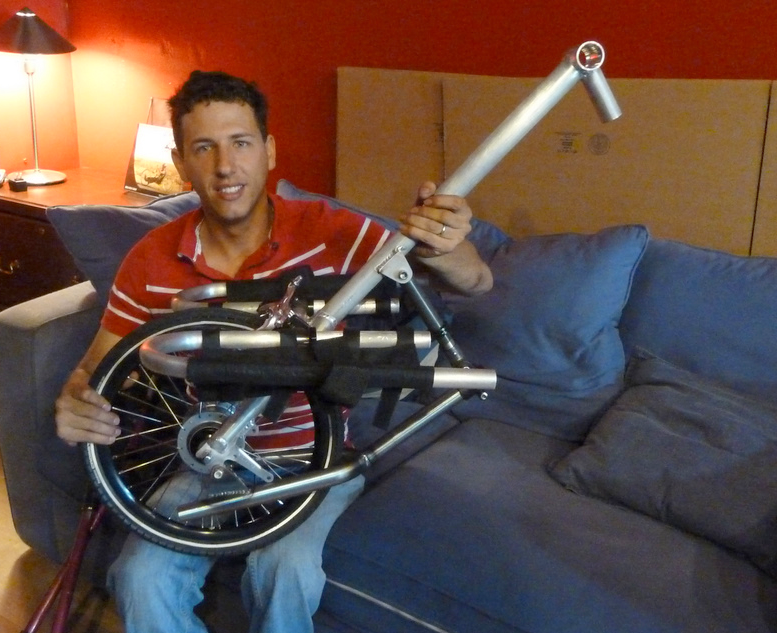 Today is October 23. We have five days to go before the Oct 28 unConference, and construction of the Morph is hot and heavy in San Diego.
Earlier, on September 17, I visited Graham Butler and the Morph Team to review the final design of the Morph, and to plan how the first production prototype of the Morph could be shown at the upcoming MassTLC Innovation unConference. (bit.ly/masstlc2011) Above, Graham holds the front end of the Morph. The upper part is aluminum, while the lower fork is made of steel. 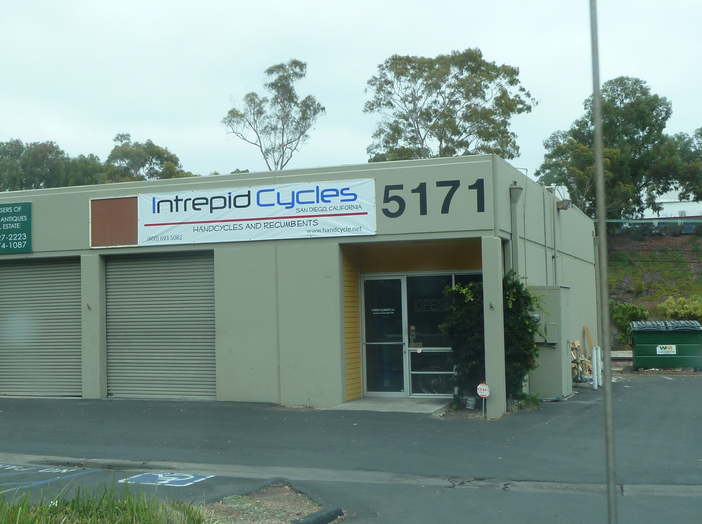 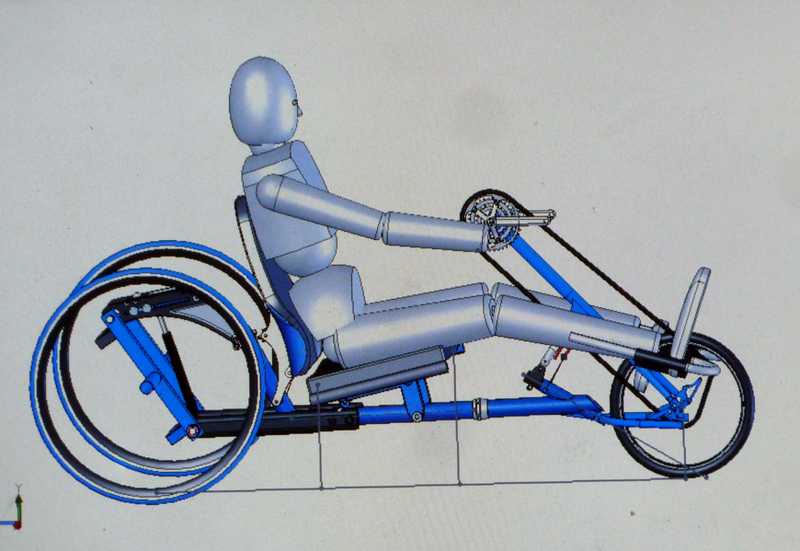 A screen shot from Graham's computer. We tested different rider sizes. It looks like Bill and Rory both fit easily on the same bike. The footrests mainly take up the difference, along with the adjustable pedal post. 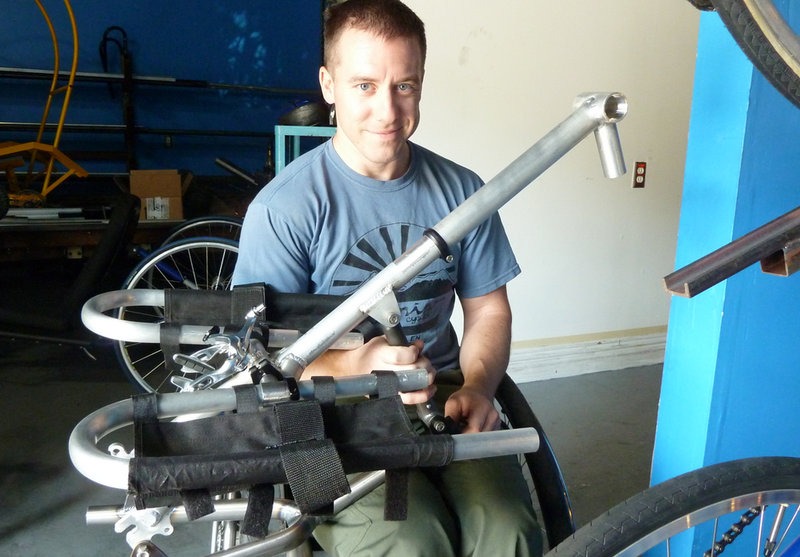 Seth Arseneau drove from Albuquerque to work with us. Seth is handling the rear, morphing part of the bike, even though here he's holding the front end which was made by Graham and company in San Diego. Seth is focused on some of the highly machined parts that make the Morph do its magic. 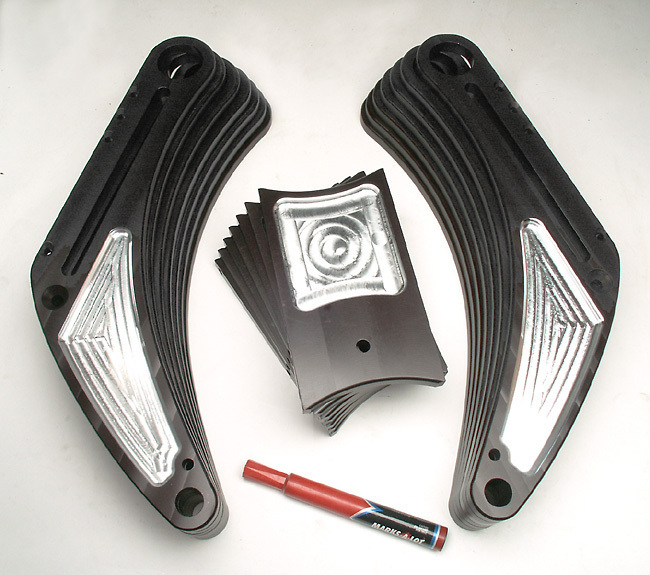 These are the "upper morphing arms." They allow for an adjustable lift system so a variety of rider weights can be accommodated with a single version of the Morph. 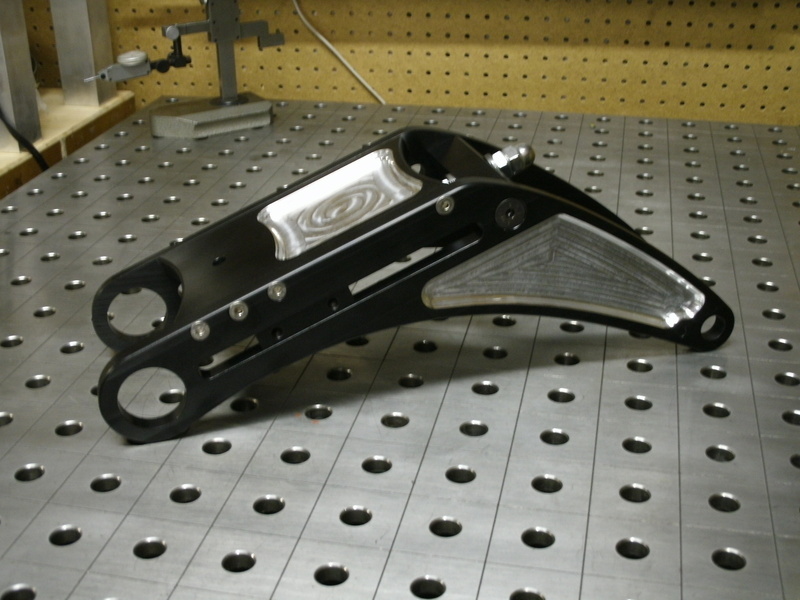 This is the assembled upper morphing arm. The silver parts have been machined out for weight reduction and cool looks. The tool did not cut all the way through so we maintain maximum strength in the arms. Note the metal table. This is Seth's very cool fast welding table that makes holding weldments easy. 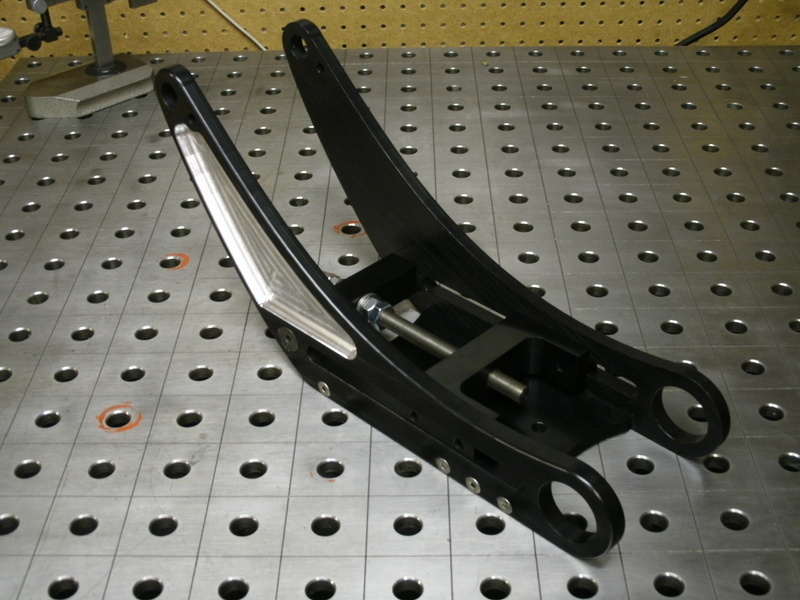 The upper morphing arm, upside down. You can see the lead screw and the "carriage" which allows the mechanical advantage of the gas springs to be changed by turning the bolt on the end of the lead screw. 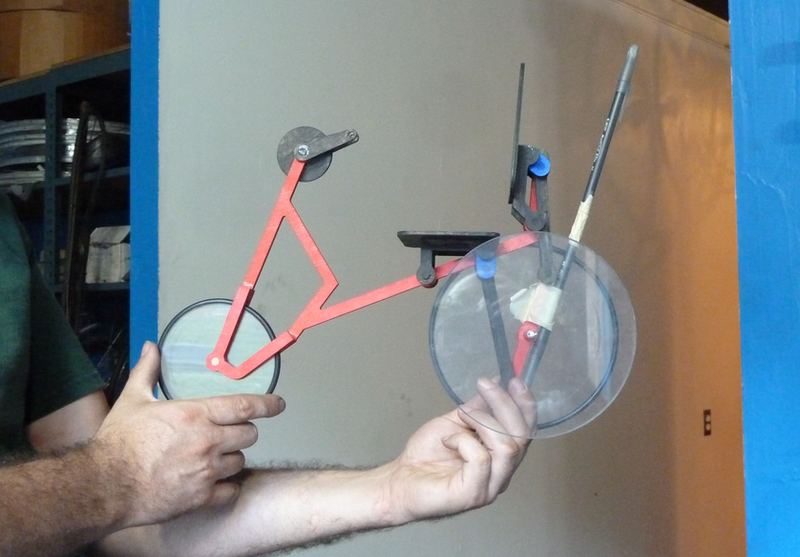 It may seem like a minor thing, but I need a crutch holder so I can stow my crutches when I ride. We used a couple of pens taped to together on the scale model to see how that might work. 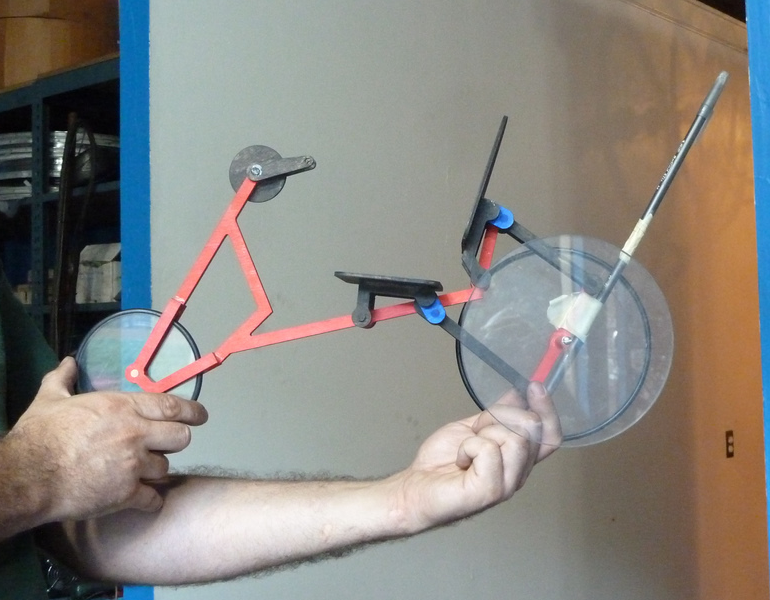 As the Morph moves down, the crutches will tilt back.

When all the way down, the crutches will tilt back nicely. Maybe we should have a little flag on them for visibility. 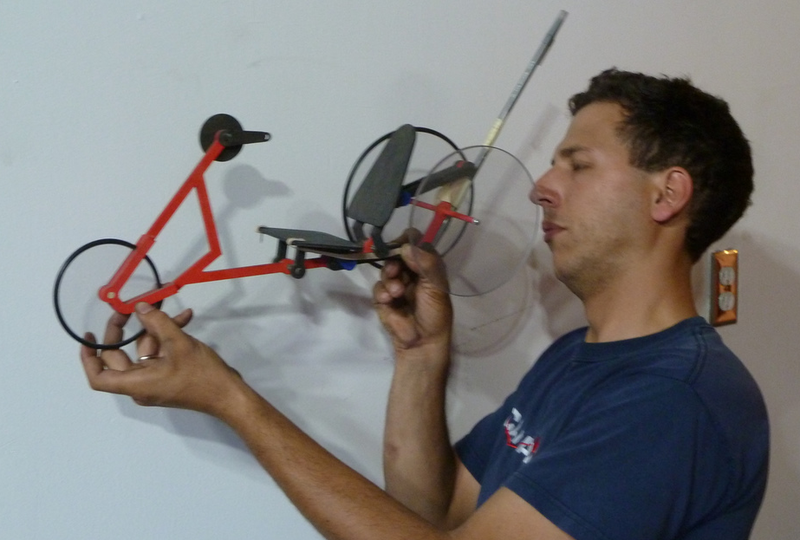 Here Graham is checking out the Morph with a proposed storage system that hangs under the seat. (shown as a rubber band.) 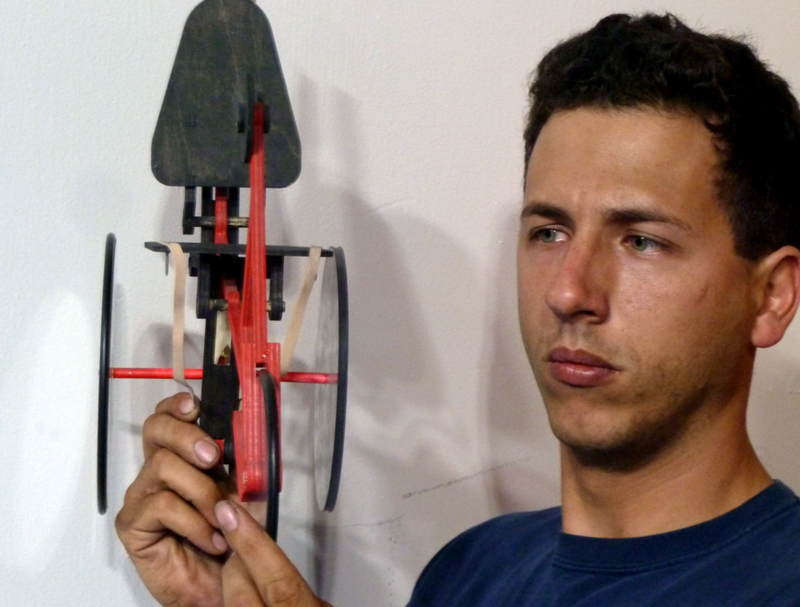 Bill's idea is to have something that hangs below the seat and can hold lots of groceries, for example. Especially in high rider mode. 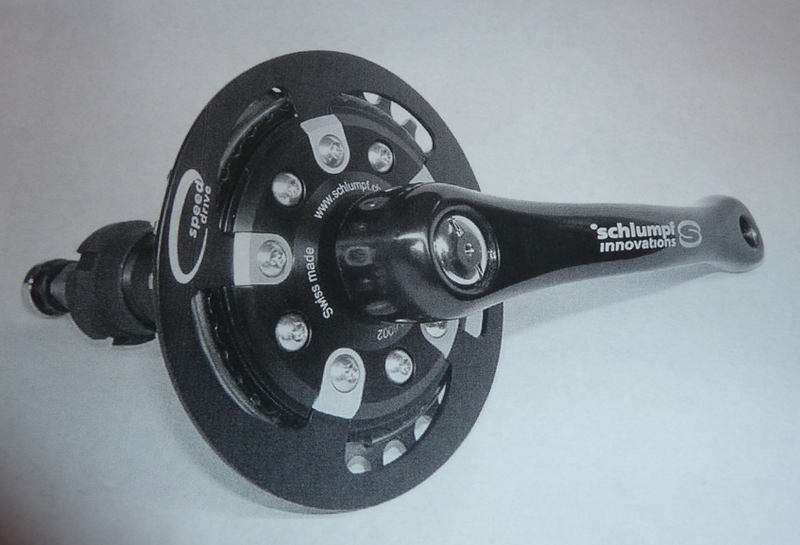 This is the Schlumpf Speed Drive. It gives a 2.5x increase in gearing when you hit the button in the crank center. This 2.5x is important, because we have a very small front wheel...only 18" in diameter.  This is 1.5x smaller than a 27" (700c) normal bike wheel. So, when you morph down, you'll engage the Speed Drive and you'll have plenty of gearing to get all the speed that the low, fast, highly maneuverable Low Rider mode offers. 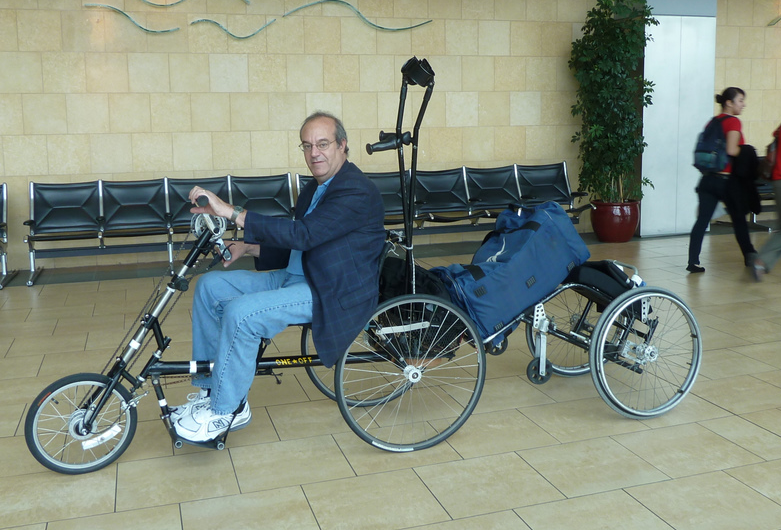 Bill used his Travel Bike on the trip to San Diego. The front end of the Travel Bike has many similarities to the Morph. Same 18" wheel. Same 8-speed internal hub with brake (from Shimano). Also, a couple bungee cords are holding my wheelchair on the back, and that also acts as a luggage cart. Nice setup!